Days went by, “feeling sorry for myself” status began to ease up a little and my confidence began to come back (let’s say the first 1%). Things got better and my friend & I decided to take a bus to New York…

Do you think it’s possible to talk for 4 hours without any break, almost without breathing? Of course it is! And this is how my friend and I past our time on the journey. Sometimes though as the bus was taking us to this unique, dreamy city, I felt an urge to cry but I managed not to. How could I?! I was heading to New York! My eyes were shining and I kept the tears at bay.

Deciding to stay right next to Grand Central Station was a good decision. Two days really isn’t enough to experience New York City but you can squeeze in quite a lot in when you’re in the heart of the city. Wall Street, Statue of Liberty (Couldn’t stop thinking of X-men – these films rock!), MOMA, 5th Avenue, Rockefeller centre, Central Park, 9/11 Memorial, great food, so much to do and sooo much walking! 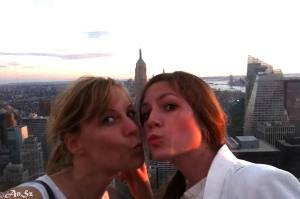 On one of my days in New York I managed to get some rest in a park (one of the many I thought) and, as if in a film, I was poignantly reflecting on life. I think it was the first time I managed to feel that I just knew I would be okay and get past this “turning point”. I obviously still felt deeply what I had lost, but something felt different. I sat quietly and watched other people in the park, a guy training, kids playing, couples on the bench, the usual stuff, seeing clearly every single little details, like in the films when they slow motion but I felt good when watching them….. My mind started to imagine something new….Boom! Finally! I actually allowed myself to be excited about the future. I started to picture a flat in London – a flat with all the things I desire! 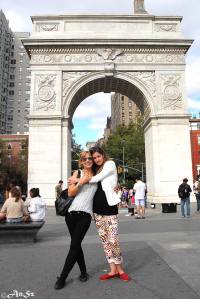 the park which is famous

(I have just recognised this park by the way in Don Jon, Minions I thought it was quite funny but I guess there is no place in New York which hasn’t been filmed yet)

From this park we went to the place I had wanted to see the most – Times Square. To me Times Square is the place to be seen! It is responsible with hosting every disaster scene in a film, every love scene! Somehow no one ever thinks it is a bit “over used”.  Towards the end of the day when it was getting dark a huge python appeared in the crowd and I just knew I had to hold it. Naturally- being normal– I was scared to hold it! And scared is not even the right word. Who wouldn’t be? But did I go for it?! Yes! Me– with a massive snake on my neck! This was HUGE!

Looking back it was this act which was the last part of my turning point!  To go beyond my comfort zone and overcome my fears made me feel determined.

Going to America was a completely fantastic and new experience – and a mind-opening one too. It was like a silly film equipped with the challenge I needed to pass. I am not suggesting everybody should hold a massive giant snake after breaking up but…well… actually, why not?!

Ps: I took this pic when I was there hoping it was someone famous (?) I would be a happy girl if it turned out that indeed he is someone I should know about. 🙂

Who is this guy?

(Author: An, edited by my lovely friend Sarah)

Next: Living from a suitcase…