Can you believe that I had never heard of the term “rebound” before? Well, I learnt this fast enough and my rebound made sure I would never forget it.

He started as a fairy-tale… He was kind, seemingly had a massive heart, he was smart, patient, good looking and single. (The last part “being single” is what he told me anyway.) Chatting for months had given me the false feeling of him being interested in me… because honestly who would invest that much time for no reason…? So naïve. Ahem.

After 5 years of being off the market I was really out of practice. All the rules of being flirty, patient, not opening up etc… Let’s just say I wasn’t very good at it. I was an honest, open book – translate it to TARGET – and also my danger radar was a bit rusty too. So guess what? He was a good player and I bought it all. Sadly I believed that my heart and self-esteem couldn’t be broken even more than it was. I was wrong. You can always be hurt more.

The worst part was to forgive myself that I was such an idiot. My shield was down, my self-esteem was low – he had a really easy job! I still believe he had good intentions and he didn’t mean to hurt me. Even if it’s not true I believe this cos it makes it easier. Otherwise I have to admit I was wrong about him, and nobody likes to be wrong. I would even go as far to say that I have learnt many lessons from him so I can’t complain. For example, how not to believe a guy when he says “I am looking for something serious now”… OR “I don’t want to go out with anyone for long because I don’t want to hurt them”. My favourite one is the “All the girls went crazy after I was with them so I don’t want to hurt anyone”. Sentences like this, and empty compliments… It all drives me nuts! Now when someone says anything slightly similar I turn around and walk away. Words mean nothing! Actions talk louder and reading from them alone is much safer.

I still have a very long way in learning how to spot a player now that I am on the market again. How to judge what they do and not what they say (the problem starts when you want to believe what they say is true, so much, that you actually start to ignore your instincts). I have learnt that when they stop texting (no answer for ages, leaving the conversation in the middle of it etc…), they simply stopped being interested and there is absolutely NOTHING you can do because as the film says, he is just not that into you! Of course it always happens when it is the guy you do like. And when you do like him you more likely to make the biggest mistake: being too intense, too much, too needy. It is very hard to control, when you are so ready to love again and you scare them away. I needed at least a year to understand why they can’t stand the pressure and why they can’t imagine that they need to tell someone again where they are and what they are planning to do etc…

It took me longer to move on from my rebound than it should have and I hate to admit it but a part of me still misses him. He was great-at times but he was young (all about parties) and a good player. I guess I can’t blame him. Looking back I know I wasn’t myself at all.

In spite of my lessons in rebounds I am grateful that I met him and had this experience. I had to lift my head up again and it might have taken me slightly longer than it probably should have but I had a journey. A journey which changed me.

Everything happens for a reason and from this point I could only go, higher. Surely?!

PS: Do you think I have learnt after this how to spot a player? Noooooooo!!!! Many more lessons have followed this….

(Author: An, edited by my lovely friend Sarah)

Next: How to find friends in London? – by “accident” 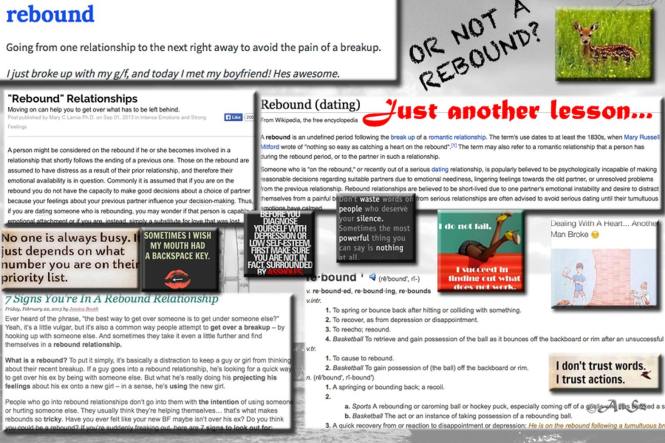 One thought on “Damn Rebound…”